The next meeting of the Medford Democratic City Committee will be Wednesday, January 9, at 6:30pm. It will be held at Medford City Hall in the Alden Chambers.

The guest speaker will be Patrick Gordon, Station Manager of Medford Community Media. The focus of Patrick’s talk will be “How to Produce a T.V. Show.”

All Medford Democrats are welcome!

Today is Election Day! Polls are open 7am to 8pm. Find your polling location here.

It’s time to GET OUT THE VOTE! Canvassing and phone banking activities are taking place in Medford multiple times per day from today through Election Day.

And, of course, don’t forget to vote on Tuesday, if you didn’t already vote early! Polls will be open 7am to 8pm. You can find your polling place here.

There are multiple canvassing and phone banking opportunities throughout this weekend to support Elizabeth Warren, Maura Healey, Jay Gonzalez, Katherine Clark, and all our Democratic candidates.

Find the full list of dates and times here. 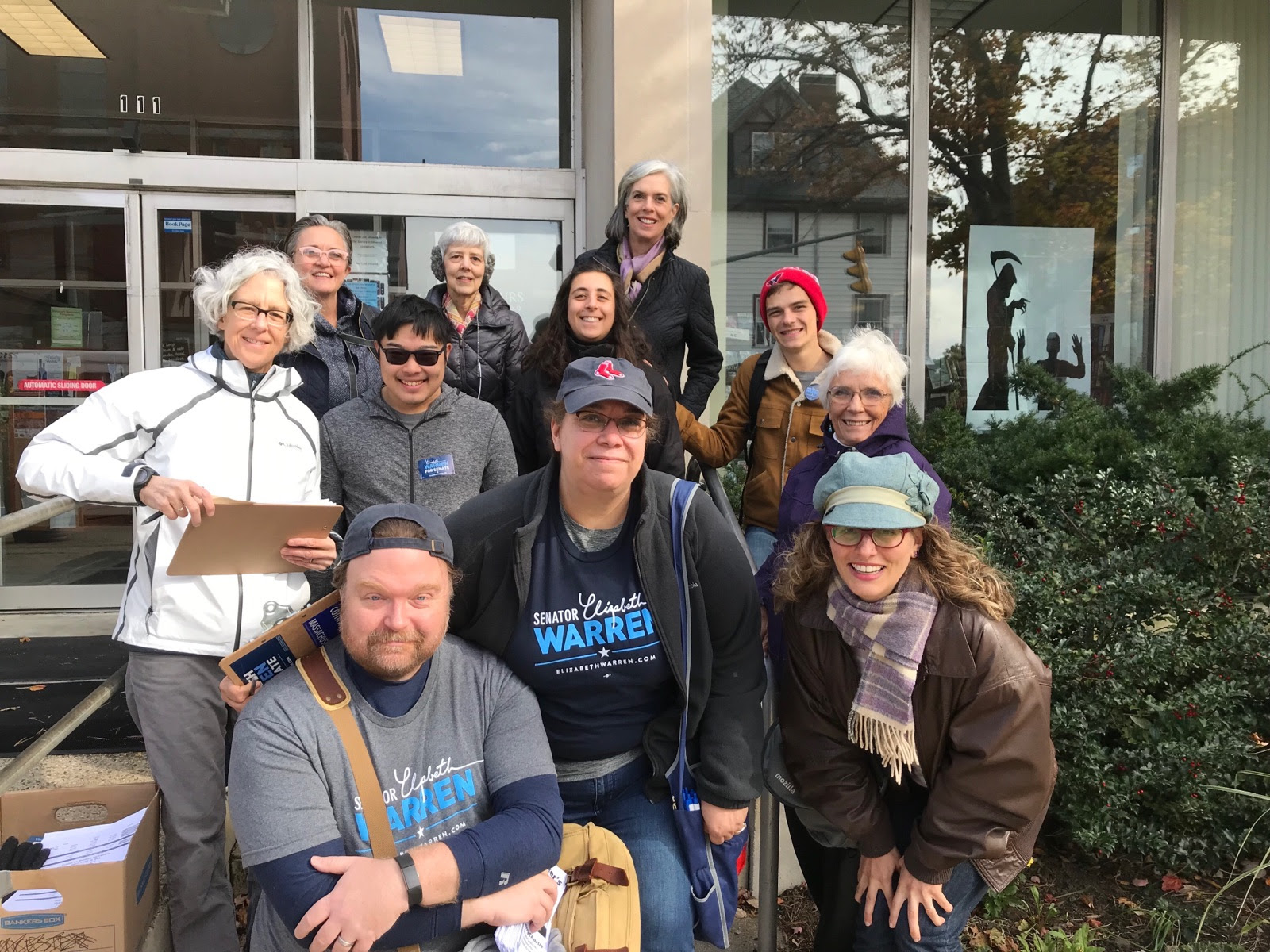 Our Congressional representative, Katherine Clark, and state Senator, Pat Jehlen, joined in on one of the Medford canvasses last weekend!

Next weekend, and through Election Day, there will be additional events throughout the city to get out the vote.

The guest speaker will be newly-appointed Medford City Clerk Adam Hurtubise. He will speak on early voting. Massachusetts is holding an early voting period ahead of the general election in November. Adam will explain Medford’s Early Voting Program.

At its September 13 meeting, the Medford Ward 8 Democratic Committee voted to endorse the full slate of Democratic candidates for the November 2018 general election:

The Committee also voted to endorse the following positions on the state ballot questions:

Following the primary election, please join the unified Democratic Party in a day of action on September 8. Canvass in Medford for Elizabeth Warren, Maura Healey, and all the local and state Democratic candidates on the ballot.

Check out the latest issue of our newsletter for information about upcoming local events to #StopKavanaugh, unify the party post-primary, and protect our environment here in Medford.

If you’re not receiving our email newsletter, you can subscribe here. Other options to keep up with Medford Democratic events include liking our Facebook page or subscribing to the website via RSS.

From the City of Medford:

There will be a State Primary Election on Tuesday, September 4th.  There will be three ballots available on Election Day to those registered to vote, a democratic, republican and libertarian ballot.   These will include the race for Governor, Lt. Governors, Congress, State Senator, State Representative, Attorney General, Secretary of State, US Senator, Governors Council, District Attorney, Clerk of Courts and Register of Deeds.Those registered voters that vote at our public schools such as the Roberts, McGlynn, Brooks and Columbus Schools, please be aware that all schools will be in session and parking is limited.  Try to avoid peek traffic times in the morning and afternoon.  The polls will be open at 7AM and close at 8PM.

The last day and hour to register to vote for the September 4th Election is Wednesday, August 15th at 8PM. This can be done at the Registrars of Voters Office in Room 102 at City Hall. For a list of polling locations visit the City website  at medfordma.org. For further information please contact 781-393-2491.

Ed. note: You can find your polling location and see a sample Democratic primary ballot by entering your address at http://www.sec.state.ma.us/wheredoivotema/

Update Aug. 18: About 50 people—including several members of the Medford Ward 8 Democratic Committee—showed up at this week’s city council meeting, with several speaking out about the sign. The council voted unanimously to move the November general election polling location for ward 8-2 from the VFW to the Senior Center on Riverside Ave. Note that the September 4 primary election will still use the VFW polling location. Thanks to all who attended and spoke up!

At its July 26 meeting, the Medford Ward 8 Democratic Committee unanimously passed a resolution condemning the “All Lives Matter” sign posted at the Medford VFW. The VFW is the polling place for residents of Medford’s ward 8, precinct 2, which spans from Medford Square to South Medford along the Main Street corridor. Committee member and secretary Mimi Gordon introduced the motion to adopt the resolution.

“With this sign, the VFW sends a clear message that it doesn’t welcome those who stand up for underserved minorities,” said Maxim Weinstein, chair of the Medford Ward 8 Democratic Committee. “All Medford residents should feel welcome when they show up to exercise their right to vote.”

The committee is calling on the VFW to voluntarily take down the sign. The Medford Human Rights Commission previously requested the same, but the VFW refused. The committee also encourages concerned residents to contact the City Clerk and members of the City Council, asking them to change the polling location for upcoming elections if the sign is not removed. The committee suggested the new city DPW facility, which is near the VFW, as a possible replacement.

The complete text of the resolution follows:

Whereas the VFW at 114 Mystic Avenue Medford is the polling place for Ward 8, Precinct 2,

Whereas Mayor Stephanie M. Burke and the Medford City Council have declared Medford as a welcoming city in November 2016,

Whereas the All Lives Matter sign on the VFW building is not a welcoming sign and is in conflict with a welcoming city message,

Whereas the phrase Black Lives Matter was created to highlight the demonstrable evidence that black lives matter less than white lives in the criminal justice system,

Whereas black people are 3 or more times more likely to be stopped, arrested, convicted and serve longer terms for the same crimes as white people,

Whereas All Lives Matter was created as a criticism of the Black Lives Matter movement and has been espoused by many opposed to equality in the criminal justice system,

Whereas the All Lives Matter phrase offends supporters of the Black Lives Matter movement and its display in a polling site may make people uncomfortable about exercising their right to vote there,

Therefore the Medford Ward 8 Democratic Committee opposes the use of the All Lives Matter phrase and supports any and all efforts to remove the sign from the VFW, cover the sign on election day, and/ or move the polling site to a more neutral, welcoming location, such as the new DPW building.

Check out our events calendar

Subscribe to receive announcements about events, committee meetings, and more.